Explorer Marco Polo traveled from Venice to China in the year 1260 AD, returning a few years later with tales of black stones that heated rooms (coal), clothing laced with gold, and the presence of prosperous Jews in Beijing.  These outlandish claims earned him the nickname "man of a million lies."

Further questioning (after Ai T'ien mistakenly interpreted statues of Mary, Jesus and John the Baptist as Rebecca with Jacob and Esau) revealed that Ai T'ien's hometown, Kaifeng, (former capital and important stop on the ancient Great Silk Road) was home to a large Jewish population.

The Jews in Kaifeng, Ai T'ien revealed, had their own synagogue, as well as a study hall, aritual bath, a communal kitchen, and a kosher butchering facility, and a large library.

Ricci sent a Chinese Jesuit Lay Brother to Kaifeng to copy  some of the holy books, which proved to be the books of the Torah, with grammatical distinctions that suggested great age.

Ai T'ien confessed to Ricci that it was difficult to follow the commands of the Torah. Success and prosperity in the Chinese culture required conformity, and many Kaifeng Israelites (Ai T'ien did not know the word "Jew") had begun to eat pork and read the Chinese literature to the exclusion of the Torah).

The sect rented a house on a hill in which to store what they had been able to salvage, copied their rescued scrolls, and by 1663 had rebuilt their synagogue, erecting a stone stele in commemoration.

Only seven families had survived the flood, however, and none of them was really fluent in Hebrew.  Another Jesuit recorded in 1708 that their religious leader could only read some words of the Torah.  Assimilation began to erode their traditions and the rate of intermarriage between Jews and the Chinese increased.

Cut off from the rest of the nation of Israel for hundreds of years, now bereft of an understanding of Hebrew, the remnant in Kaifeng set up a Torah scroll in the public square and offered a reward for any traveler who could interpret their Scriptures, but no passersby were able to take advantage of the offer.

One Kaifeng Israelite wrote this to a friend… "with tears in our eyes and with offerings of incenses do we implore that our religion may again flourish. We sought everywhere, but could find none who understood the letter of the Great Country (i.e. Hebrew), which causes us deep sorrow."

By 1850, the synagogue had closed and was shortly thereafter destroyed.

The Jews of Kaifeng were no more.

Where had they come from?  Given the fact that the largest contingent was in Kaifeng, a stop on the Great Silk Road  (which began to take shape nearly three thousand years ago), the best guess is that they were early Chinese entrepreneurs.

The fact that the earliest stele erected by the group summarizes the history of the nation but stops at Ezra supports a very early arrival.  There are also oral traditions of Jews emigrating through Persia to China after the destruction of Israel in 70 AD.

A business letter written in 718 in a Judeo-Persian mix,  discovered in NW China at Danfan Uiliq  (another important post along the Silk Road)  confirms a Jewish presence in China by that date. The text is written on paper, a product then manufactured only in China.

Recent translations of the inscriptions by Jewish expert Tiberu Weisz would seemingly nail down the Kaifeng Jew's origins.  A group of priests and Levites during the Babylonian exile traveled east, staying in India for several generations, then traveling to the western regions of the Chinese empire.

(The three stele erected by the synagogue in Kaifeng seemingly record in inexplicable detail the rites practiced by the congregation and the building and rebuilding of their synagogue/temple-- a fact which supports their authors being priests and Levites.)

The exiles were discovered by a Chinese military contingent in 108 BC and, in Israeli style of today, invited to continue residing there as a buffer from Chinese enemies.  (Military records by General Li Guangli confirm contact with a group that "looked strange", his depiction of their headdress matching the appearance of the phylacteries that observant Jews would have worn.)

When Chinese troops withdrew from the western wilderness in the 3rd century AD, the populations of those areas generally withdrew as well into China's heartland, which may be how the ancient Jews arrived in Kaifeng and Beijing.

So why do we care?  Aren't the Jews in Kaifeng lost to history?

The destruction of the synagogue in Kaifeng was followed shortly by the fall of the last Chinese emperor and the rise of Communism in China, where conformity was necessary for survival and atheism the required religion.  But some families, at least, remembered a heritage seldom vocalized.  They continued to avoid pork.  Parents and grandparents would remind them, behind closed doors, that they were Jewish and someday they would go home.

The loosening of the Communist chokehold on China and re-establishment of diplomatic relations with the West (particularly Israel) rekindled an interest in Jewish heritage. Today about a thousand  residents of Kaifeng trace their lineage back to that early Jewish community; a small minority of those have begun to embrace the faith of their fathers. Shavie Israel is actively involved with Kaifeng’s Jewish descendants and is providing them with Jewish books (in Chinese) and other basic materials for worship.

Shi Lei spent three years in Jerusalem, studying first at Bar- Ilan University in Jerusalem and then Mechon Meir Yeshiva.  He eventually returned to China to give classes on Judaism and Hebrew to the rest of Kaifeng’s Jewish residents.

Seven young Kaifeng men applied for residency in Israel under the Law of Return in 2008 and arrived a year later-- fulfilling, after ostensibly three thousand years, a promise of God:

"Surely these shall come from afar; Look! Those from the north and the west, And these from the land of Sinim." Isaiah 49:12

And sometimes we get to watch it happen.

Prophecy Devotional: "The Witness of the Holy Spirit in Man” -Joseph Chambers

The Witness of the Holy Spirit in Man

The spirit of man is indeed the whisper of God. Our Creator Â“breathedÂ” into Adam the Â“breath of lifeÂ” and Adam Â“became a living soulÂ”. (Genesis 2:7) Sin invaded AdamÂ’s life and Adam died spiritually, and later physically, and we inherited this fallen nature. The breath or whisper of God is still present, but it is dead in trespasses and sins. Our spirit must be renewed in the Holy Ghost or we remain dead and lost. The Apostle Paul spelled out this wonderful work of renewal by the Holy Ghost. He said Â“Not by works of righteousness which we have done, but according to his mercy he saved us, by the washing of regeneration, and renewing of the Holy Ghost; which he shed on us abundantly through Jesus Christ our Saviour.Â” (Titus 3:5-6). There is no other way for any individual to know God and be redeemed from sin but by this incredible Â“New BirthÂ”.

When a man or woman is Â“Born AgainÂ”, their life is literally invaded by the Spirit of God and the life of God is infused into their human spirit. This person is immediately, that very split second, a new creature in Christ. Old things of the sin life pass away and become repugnant to them. The pure Word of God says it best, Â“Therefore if any man be in Christ, he is a new creature: old things are passed away; behold, all things are become new.Â” (II Cor. 5:17) The resultant life is beautiful indeed.

As newborn babies, they are instructed, Â“As newborn babes, desire the sincere milk of the word, that ye may grow therebyÂ”. (I Peter 2:2) The new life multiplies as the young believer seeks after God in the Scripture and in consecrated prayer. Peter further instructed, Â“Ye also, as lively stones, are built up a spiritual house, an holy priesthood, to offer up spiritual sacrifices, acceptable to God by Jesus Christ.Â” Â“ But ye are a chosen generation, a royal priesthood, an holy nation, a peculiar people; that ye should shew forth the praises of him who hath called you out of darkness into his marvellous light.Â” (I Peter 2:5,9) I experienced this new life fifty-one years ago and it gets sweeter every day.

The wonderful life in the Holy Ghost can only increase and grow as we yield to the Spirit of God in careful harmony with the Word. There are religious spirits that seek constantly to turn the believer aside from this straight and narrow way. (Every fallen angel is a religious spirit.) We are taught to Â“try the spiritsÂ”. Â“Beloved, believe not every spirit, but try the spirits whether they are of God: because many false prophets are gone out into the world.Â” (I John 4:1)

The Christian life is a careful balance between thousands of extremes and only consecrated lives can find that balance. There is a multitude of good people in our churches that are rendered helpless by the lack of devotion to spiritual things. This is the very purpose of the Â“Salty SaintsÂ” weekly inspiration.

Could I ask all of our readers to study the book of I Corinthians with me? Notice what the Apostle Paul said to these believers at Corinth. Â“But the natural man receiveth not the things of the Spirit of God: for they are foolishness unto him: neither can he know them, because they are spiritually discerned. But he that is spiritual judgeth all things, yet he himself is judged of no man.Â” (I Cor 2:14-15)

The spiritual life is GodÂ’s gift to you but it will never be forced. You cannot know the joyous life of Â“living in the SpiritÂ” unless you abandon yourself to that life. The Holy Spirit alone working in you will reveal the deep things of God. This life will never be experienced by just church attendance or doing religious activities. It is the result of waiting before God in yielded surrender. Our God reveals this life as we Â“hunger and thirst after His righteousness.Â” Again the Apostle said, Â“But God hath revealed them unto us by his Spirit: for the Spirit searcheth all things, yea, the deep things of God. For what man knoweth the things of a man, save the spirit of man which is in him? even so the things of God knoweth no man, but the Spirit of God.Â” (I Cor 2:10,11)

Remember two words, Â“But GodÂ”. Self-righteousness quickly becomes legalistic and self-induced. Spiritually, self-righteousness is Â“filthy ragsÂ”. Â“But GodÂ” is fully committed by His Spirit to perform His Sanctification in you and Â“His NatureÂ” will be imparted into Â“your spiritÂ”. The beauty of a saintly life will become as natural as the sin life was natural in the past. There is no put-on in a genuine Â“Spirit-filledÂ” life. It is Â“joy unspeakable and full of glory.Â” (I Peter 1:8)

The Last Days Video Series: LEFT BEHIND [1 of 6] 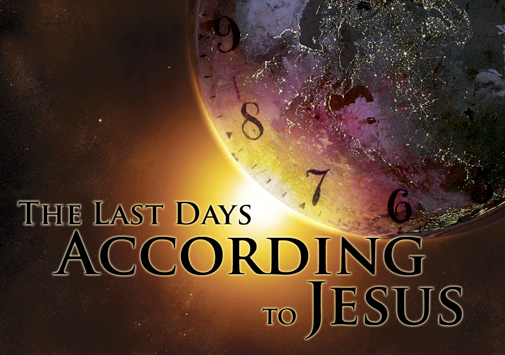 "Watching to be Ready"

Prophecy Today Q&A: "What Will We Know?" -Jack Kelley

"Answering the Questions in Prophecy Biblically"

What Will We Know?

A. The Bible says for now we only see shadows and fuzzy images of what’s to come, but after the rapture we will know fully, even as we are fully known (1 Cor. 13:12).  Scholars take that to mean that we will understand God’s plan as God understands us, completely.

"When You Need to Know"