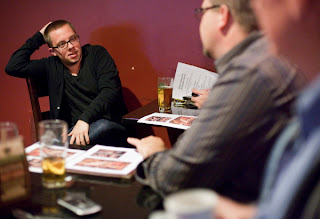 Go on, have a pint with the Lord

Some church officials believe mixing God with drinks may be walking a very thin line for some Christians.

Some church officials believe mixing God with drinks may be walking a very thin line for some Christians. Pawel Dwulit for The Globe and Mail

Beer isn’t the only thing on tap at the local pub. It may be an unorthodox place for a theology group, but pastors who’ve tried it say a little libation goes a long way in having honest-to-God discussions on faith

On Wednesday nights at Ballygiblin's pub in Ottawa, the most animated conversations involve neither hockey nor politics. Instead, over pints of their local microbrew, patrons are more likely to be engrossed in debate over the significance of Jesus Christ in the modern world.

Pastor Ahren Summach of the Ottawa Valley Vineyard church realizes it may be an unorthodox place to hold his weekly theological meetings.

But since they began earlier this year, his sessions regularly draw more than a half-dozen men who gather to drink and examine such questions as, “Is Jesus God?” and “If God is good and all powerful, then why is there suffering in the world?”

The appeal of holding the meetings in a pub, Mr. Summach said, “is trying to blur the lines between what's a sacred space and what's a secular space. Without the religious setting, you get more authentic discussion, more honest questions and a little more honest sharing.”

Ahren Summach, centre, draws more than a half-dozen men to a weekly theology group at a pub in Ottawa.

He is not the only one who believes in the benefits of mixing spirituality with spirits.

A growing number of Christian groups from a variety of denominations are taking God to the bars, launching religious-themed pub nights dubbed “martini masses” or “theology on tap” in an effort to broaden their reach.

The trend, believed to have started in Britain, where pubs are an integral part of social life, has spread throughout the United States.

Over the past year, new theology pub groups have also cropped up across Canada, in Ottawa, Toronto and Vancouver.

Often organized by church leaders, these pub nights are generally little different from traditional discussion groups held at churches or community centres, aside from readily available alcohol. While some include a sermon or prayer, Mr. Summach's consists of about an hour-long, informal discussion about a selected topic on faith.

Not everyone within the Christian community approves, however.

Darryl Dash, who organizes a theology pub group in Toronto with members from various churches, said some people have declined to attend because they were uncomfortable with the location. Others said they were worried about how their churches would react.

“There are some churches that are still into temperance and complete abstinence from alcohol,” said Mr. Dash, pastor of the Richview Baptist Church.

But he noted that more churches are now tolerant of moderate consumption.

Mr. Summach has also seen a shift in Christians' attitudes.

“Two decades ago, a pastor in an evangelical church trying to do a meeting of any kind in a pub would have been tarred and feathered and run out of town,” Mr. Summach said.

Pub nights are part of an ongoing trend of Christians entertaining ideas once considered taboo and exploring religion beyond church walls, he said.

Jesus Christ himself, Mr. Summach noted, was believed to have kept company with religious and non-religious people alike, in all types of situations.

If Jesus were alive today, Mr. Dash adds, a pub is “probably one of the places he would go.”

Mr. Summach said his theology pub group was not intended as a vehicle for evangelism. However, pub patrons seated nearby occasionally overhear their discussions and spontaneously join in. Participants of his group range from high-school students (who stick to non-alcoholic beverages) to men in their mid-60s. A few have never been to church at all.

The eclectic mix often results in differences of opinion, Mr. Summach said. But so far, the disagreements have never gotten out of hand. “We haven't really touched on anything that has caused any strong emotional reaction yet.”

Ms. Visser, who helped promote “Alpha on Tap,” a series of pub discussions that began last month, said around 30 people, nearly half from non-Christian backgrounds, attend each session.

The majority are young professionals looking to unwind after work. And many would probably never have joined the group if the discussions were held in a more formal location, she said.

“It takes away that roadblock to give people the freedom to explore Jesus,” she said.

Jeff Graham, communications officer for the Roman Catholic Archdiocese of Vancouver, said he has noticed that individual Catholic groups have recently begun initiating theology discussions in pubs around the city.

The Archdiocese maintains that drinking too much alcohol is “a serious matter,” Mr. Graham said, suggesting theology pub groups might walk a thin line.

Since Christians believe Jesus's first miracle was turning water into wine, “we know that religion and alcohol can go together,” he said. “On the flip side, there are countless warnings in scripture about the perils of drunkenness. So, mixing religious discussion and alcohol can happen, but mixing religious discussion and drunkenness cannot.”
Posted by Michael James Stone Links to this post

I knew that Paula Abdul was Jewish, but


I knew that Paula Abdul was Jewish, but that she lights Shabbos Candles?

So, not one just to complain and talk about negative things happening, I thought that I would write something more positive now.  So I was sent a link to watch a youtube video, and on the right hand side bar I saw this video below talking about Paula Abdul and her being a good Jewish girl, so curiously, I clicked.  Watch at 18 seconds in where she admits that she lights Shabbat Candles.

So, some nice news above, - and no, let's not have any sarcastic - she's not dressed modestly or she does this or doesn't do that.  We are all on our own spiritual journey, so please, no 'holier than thou' talk backs.

And to follow up on this nice little news item, there IS a re-kindling of Judaism in Jews who have strayed away to the secular world.  My 18 year old son who is in a pre-army program at the moment, went with his Yeshiva - at the request of a secular kibbutz, to hold Yom Kippur services in their club house (they were so anti-religious, they didn't even have a synagogue on the kibbutz).  -Well, after that Yom Kippur, the kibbutznik who arranged to have the Yeshiva boys come to lead the services for them, said that their club house has NEVER been so full.

There was not enough room, not enough chairs, not enough prayer books for all the kibbutznikim who came for the Yom Kippur services.  In addition, see this article on how kibbutzim (and now also neighborhoods in Tel Aviv [known as the 'secular city']) are requesting synagogues and mikvahot (spiritual 'modest' bath houses) to be built for them.
"The Israeli secular community does not really know what to make of the new trend, but Baruch Hashem, many kibbutzim and other secular communities around Israel are requesting a shul and mikve, the very same communities that have lived for decades without the holy structures.

Many of the secular kibbutzim have been ideologically opposed to the construction of the buildings, working with tenacity to remove any trace of Yiddishkeit from their communities.

This year, dozens of shuls and mikvas have been constructed in secular communities and it appears the trend is gaining momentum. 50% of requests given to the Ministry of Religious Services have come from secular kibbutzim and moshavim."  To read more, click HERE.

In addition, more and more people today are looking for spirituality in a bankrupt world that offers no ideology except for self gratification and easy money.  But things are looking up. When American Idol star Paula Abdul lights Shabbat candles, prays, and goes to a Chabad shul, and even Madonna with her lewed past, is looking for spirituality, albeit in a misguided way, maybe, just maybe, we are closer to redemption than we thought.

Sex Offenders Denied God? Gospel Only to the Godly 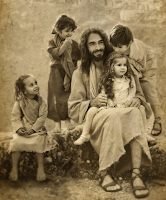 
(2 of 2) Allen Hunt - Sex Offenders In Church (10-12-2009)
Enter code here
Please note, although no boardcode and smiley buttons are shown, they are still useable

webmaster (Admin)
"An eye for an eye makes the whole world blind"
Admin
Posts: 2578
graph
User Online Now Click here to see the profile of this user
Citizens for Change
Posted by Michael James Stone Links to this post

Getting into Disneyland ~ Greg Laurie 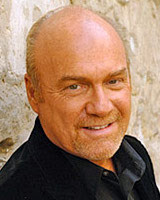 
I don’t know about you, but I am not a fan of long lines.

Of course, I will still count the number of items the person in front of me is buying too!

And when a new lane opens and they say, “Next in line,” I’m a happy camper.

Imagine that you are standing in the hot blistering sun, waiting for Disneyland to open. You are far back in line, and it seems to be taking forever.

Suddenly, a man comes to you and identifies himself as the CEO of Disney. He invites you to step ahead of the line and get in the park before everyone else.

Would you be happy about that? Of course you would, though I’m sure the other people waiting might resent that a bit.

That’s how it is when a Christian dies young or unexpectedly. They get to go ahead of the rest of us, not to Disneyland but to heaven!

Getting into heaven early is a privilege , not a punishment. It’s a promotion, not a termination. An early death means an early crown.

Our deepest regret is we didn’t get to go with them.

We should not think of our loved ones in heaven as being gone. That word is taken from the vocabulary of death, and it implies that the loved one no longer exists, which could not be more false.

The Bible says that they have departed to be with Christ, which is far better (Philippians 1:23).

If you must use the word “gone,” then you should say, “They are gone from me now, but I will see them again.” This is the great hope of the Christian!

Jesus said to her, “I am the resurrection and the life. He who believes in Me, though he may die, he shall live. And whoever lives and believes in Me shall never die. Do you believe this?” (John 11:25-26)
Posted by Michael James Stone Links to this post