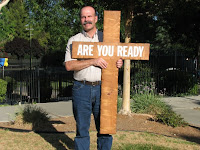 Marissa and I spent about an hour last night at the corner of Avenida Entrana and Lyons Avenue. It was a very nice time of fellowship with my middle daughter. We weren't there long before a young man road his skateboard across Lyons Avenue. As he reached the corner, I handed him an Obama Trillion Dollar Bill gospel tract. "Did you get your trillion dollars, today?"

He stopped and took the tract from my hand. A smile appeared on his face. His name was John. He was sixteen.

John looked at the back of the tract, and then looked up at the cross. "What are you protesting?" He asked.

"We're not protesting anything." I said with a chuckle.

"I mean, what are you trying to say?"

"Well, I'm hoping people like you will stop by so I can ask them if they're ready. Are you ready for eternity? What do you think will happen to you when you die?"

"Do you believe God exists?"

"Do you believe heaven and hell exist?"

"So, what do you think a person has to do to go to hell?"

"How about heaven? What does a person have to do to go there?"

"Believe in God and confess your sins."

"John do you consider yourself to be a good person?"

"Well, I wouldn't say I'm good or bad. I use to do a lot of bad things; but I try not to do them anymore. I guess I would say I'm somewhere in the middle."

"Are you familiar with the Ten Commandments?"

"Can you name a couple?"

Using those four commandments, I took John through the Law. He admitted to being a lying, thieving, adulterous, murderer at heart.

"I did when I was little. But I try not to do that anymore."

"John, what if I were to steal your skateboard and I got away with it for twenty years? One day the police knock on my door and say, 'Tony, we have evidence that you stole John's skateboard twenty years ago.' If I said, 'Well, I'm not guilty because that happened a long time ago,' would I no longer be guilty?"

"That's right. Time doesn't forgive sin. It doesn't matter if you stop breaking the law. The problem is that you're guilty because you have already broken it. Does that make sense?"

"So, John, according to your own admission, you are also a blasphemer. If you were to die tonight and God judged you according to His Law, do you think He would find you innocent or guilty of breaking His Law?"

"And if He found you guilty, what should He do with you? Heaven or hell?"

"Does that concern you at all?"

"What about that doesn't concern you?"

"Well, like I said, I use to do a lot of bad stuff. But I don't do that anymore. Now, I just try to live my life and whatever happens, happens."

"But, John, if we care about our lives that may last seventy or eighty years, shouldn't we care even more about our souls that will live for eternity?"

"Do you have any idea what God did so that you might not have to spend eternity in hell?"

John thought about the question for a moment.

"He forgave our sins?"

I had been standing with the cross facing the street so that passing cars could see it while I talked to John. I turned the cross so that it was facing directly at John. He smiled.

"Many times. My mom is a court reporter."

"I've been to court many times, too. I was a deputy sheriff."

John told me that his mother works in one of the Superior Courts, in the San Fernando Valley.

I took John through the courtroom analogy.

"John, would that be good news if someone came into the courtroom and paid your fine?"

"What would you think of the person who paid your fine?"

"I would think he was a savior."

"Well, that's a picture of what God did. Two thousand years ago, God the Father sent His Son to Earth in the person of Jesus Christ--fully-God and fully-Man, but without sin. Unlike you and me, He never once violated the Law of God in thought, word, or deed. He couldn't. He was God in the flesh--the sinless Lamb of God. He was born of a virgin, just as the prophet said He would be, 750 years before His birth.

"Thirty to thirty-three years into that earthly existence He voluntarily went to the cross. He suffered, shed His innocent blood, and died a horrific death. The Bible says that he was so badly beaten and mutilated that He could barely be recognized as human. He suffered and died, taking upon Himself the punishment you and I rightly deserve for violating God's Law. Three days later He rose from the dead and forever defeated death. Unlike the false gods of every other religion on the planet, Jesus Christ is alive and He will return at a time of the Father's choosing.

"What He commands of you, me, and everyone else is that we repent--that we turn away from and forsake our sin; and that we receive Jesus Christ as our Lord and Savior.

"If God causes us to be born again, then as a result we will want to turn from our sin and place our faith and our trust in Jesus Christ alone to save us. And if God does that loving and miraculous work in your life, He will take your heart of stone and give you a heart of flesh. You will begin to love the things that God loves; and you will begin to hate the things that God hates.

"And when you die and stand before Him, instead of receiving what you deserve for breaking God's Law (which is eternity in hell), you will receive what you don't deserve (which is grace, and mercy, and everlasting life in heaven, with Jesus Christ).

"That's the message of the cross, John. And that's good news."

"Does that make sense?"

"Have you ever heard it put that way before?"

"Then let me ask you another big question. What are you going to do about it?"

John looked off into space and didn't say a word for several moments.

"John, is there any sin in your life that you love so much that you are willing to spend eternity in hell so you can enjoy that sin in this life?"

"The, please, repent and believe the gospel. I'm out here every day, so we may see each other again. Then again, we might not. I care about you. I don't want you to go to hell. I can't condemn you, and I can't save you. But I know the one who can. His name is Jesus Christ.

"Will you please give it some thought?"

"When did you read it last?"

"I read the whole thing in ninety days."

"Wow! That's impressive. When did you do that?"

"I've been sober for six months."

"That's great, John. What was your drug of choice?"

I shared with John that someone very close to me had struggled with addictions and has been sober, now, for about twenty-five years.

I handed John a "In Times of Crisis" tract and my business card.

"If you have any questions, or if you would just like to talk, please give me a call or e-mail me."

"God bless you, John. We will be praying for you."

And with that, John hopped on his skateboard and disappeared into the night.

"I'm glad you were here to see and hear that, Marissa."

We walked to the car and loaded the cross into the trunk. Once inside the car, we prayed for John.

What a blessing it was to offer John freedom--a far greater freedom than freedom from addiction to drugs.

Life on Other Planets?~Billy Graham

Life on Other Planets?

Q: Our 7-year-old son asked us to ask you this question: Do you think there's intelligent life on other planets? Does the Bible say anything about this? Our son is very curious about things like this. - Mrs. W.H.

What the Bible does say about the universe, however, is very important - and I hope you'll teach it to your son. It's found in the very first verse of the Bible, which tells us that everything in the universe was made by God: "In the beginning God created the heavens and the earth" (Genesis 1:1). The galaxies and the stars and the planets didn't happen by accident; they came into existence because God made them.

And the same is true of all life - including us. We are here because God put us here - and He put us here so we could know Him and serve Him. God loves us - and the proof is Jesus Christ, who came down from Heaven to save us. The Bible says,

"This is love: not that we loved God, but that he loved us and sent his Son as an atoning sacrifice for our sins" (1 John 4:10).

Be thankful for your son's curiosity - and ask God to help you use it to point him to Jesus. (Many parents find a children's Bible story book helpful for this; your local Christian bookstore can suggest several.) Make sure most of all of your own commitment to Christ; the greatest gift you can give your son is your example of a strong and vibrant faith.

Affectionately known as the "World's Preacher" for more than 60 years, the Rev. Billy Graham is one of the most influential and respected spiritual leaders of the 20th century. He has been a friend and spiritual advisor to ten American presidents and has preached the Gospel to more people in live audiences than anyone else in history - nearly 215 million people in more than 185 countries and territories - through various meetings. Hundreds of millions more have been reached through television, video, film, and webcasts. Send your queries to "My Answer," c/o Billy Graham, Billy Graham Evangelistic Association, 1 Billy Graham Parkway, Charlotte, N.C., 28201; call 1-(877) 2-GRAHAM, or visit the Web site for the Billy Graham Evangelistic Association: www.billygraham.org.
Posted by Michael James Stone