Take it to the Streets: The Gospel~Tony Miano 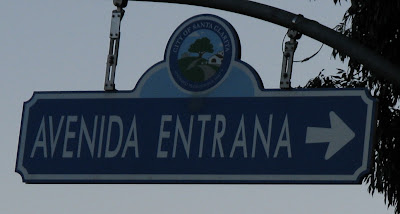 Does today's post title have you a little perplexed? Allow me to explain.

It was only 100 degrees, today, on Avenida Entrana. I think it may be premature to call it a "cooling trend." Once again, affirming and friendly motorists far out numbered the angry ones. But of all the motorists who passed by, one in particular is etched in my memory.

Traveling at no less than 40 mph, a man on a motorcycle approached the intersection, heading eastbound on Lyons Avenue. Before he entered the intersection, he rose to his feet and stood straight as an arrow. Then he slowly stretched his arms out to his sides, with his palms facing forward, and tilted his head back. He maintained this position all the way though the intersection. He was living proof that depravity's got talent. But his talent was overshadowed by his blasphemous display as he mockingly tried to mimic Jesus hanging on the cross.

The Lord, however, would redeem the time on Avenida Entrana.

I was just about to leave to meet Mahria and the girls at In-n-Out Burger for dinner when I was approached by two Hispanic gang members. Now, some who read this may jump at the chance to call me judgmental for referring to the two young men as gang members. But having worked as a gang investigator for a number of years, I believe the old adage is still true. If it looks like a duck, quacks like a duck, and walks like a duck; well, it's probably a duck.

Both were dressed in the latest in gangster apparel, complete with baggy pants, monogrammed belt buckles and matching dark baseball hats, and the usual array of costume jewelry. Both had tattoos that looked like they either etched their own body or an even less talented body artist did it for them. One was short. One was tall.

"Ready for what?" The short one said with a sarcastic tone and a grin on his face.

"Eternity. Are you guys ready for eternity?"

"When is that?" The short one asked.

"When you die. We're all going to die someday. Right?"

Both nodded their heads and agreed. In their answer, each tried to express their lack of concern with a little false bravado.

"So, what's going to happen to you guys when you die?" I asked.

Neither knew for sure, but both affirmed a belief in heaven and hell.

"What does a person have to do to go to heaven?" I asked.

"Be good." They answered.

"Have you guys been good?"

They laughed and shook their heads.

I took the two young men through the Law, with both admitting to being lying, thieving, blasphemous, murderers-at-heart. Before I could even ask what they thought God would do with them if He found them guilty of breaking His Law, the shorter one looked at the ground and said, "I'm going to hell."

The taller one nodded his head in agreement.

"Does that concern you guys?" I asked. Both said that it did.

"Do you have any idea what God did so that you might not have to spend eternity in hell?"

"Jesus died on the cross." The taller one answered.

"Have either of you been in a courtroom?"

"In a courtroom?" The shorter one asked.

"Me, too. In fact, I probably spent a lot more time in courtrooms then either of you. I was a deputy sheriff and I worked COBRA (the gang unit at Santa Clarita station)."

Their eyes grew as large as saucers.

I took the two young men through the courtroom analogy. As I did, a sheriff's patrol car slowly made its way through the intersection. I made eye contact with the deputy and gave the customary nod of acknowledgement. I'm sure the sight of a guy holding a large cross talking to two gangsters was probably something he doesn't see every day.

When I turned back around, both of the young men's eyes were fixed on the patrol car. Their posture seemed to indicate that they were ready to run if the patrol car stopped.

I stepped between them and their view of the patrol car. "Relax. Nothing is going to happen." I said.

I shared the gospel with them. The taller one said, "I understand what you're saying."

"A good judge would turn to you and say, 'You should have thought about that before you broke the law.' And the same will be true when you stand before God.

"Does that make sense?"

"Yeah it does." They answered.

We shook hands and I asked them to think carefully about what I told them. They said that they would.

They started to cross the street.

"You guys be careful."

I walked to my car, praying for those two young men the entire way. Once again, I thanked God for using the cross to give me the opportunity to share the gospel with two young men I may not have ever met, otherwise.

A few days ago we reported to you that teacher and author, Roger Oakland, had fallen, resulting in breaking his ribs and puncturing a lung. Emergency surgery was performed in Canada. Today, we learned that his condition has possibly worsened. We received the following update:

Roger's surgeon did find more air trapped between his lungs and chest. They had to re-insert the drain tube to get the air out. In addition, he hit his head when he fell and now he is seeing double in one eye. They will have to do a CT scan and/or an MRI to see what is going on.

Roger has a very amazing background and has been sacrificially serving the Lord for many years. Prior to his becoming a Christian, Roger was a biology professor at a Canadian college. He was also an evolutionist. Through a number of circumstances in his life, he came to believe that there was a Creator. This led him to Jesus Christ, who became his Lord and Savior. Roger has been faithfully serving Him ever since, and sometimes at a great cost. His most difficult years have been this past decade. After losing one of his sons in a tragic accident about seven years ago, Roger continued on with his ministry, part of which has included developing four orphan homes he helped to start in Myanmar. Perhaps his greatest challenge in ministry began when he wrote Faith Undone, taking on some of the heavy weights in the emerging church/new spirituality movement and exposing the truth behind the emerging church and the Purpose Driven movement. It was a message that some Christian leaders did not want to hear. But Roger has been a courageous brother and willing to lose all for the sake of Christ.

We beseech those who love truth and the Gospel to pray fervently for this man who may never be considered by mainstream Christianity a leader in the church but who in actuality is that very thing.

Yea doubtless, and I count all things but loss for the excellency of the knowledge of Christ Jesus my Lord: for whom I have suffered the loss of all things, and do count them but dung, that I may win Christ. Philippians 3:8

The Gospel of Oppression?

Former President Jimmy Carter, speaking for himself and some other religious leaders, made headlines issuing a statement that religion is used to oppress women. Carter says he severed ties with the Southern Baptist Convention because its leaders “claim” that women must be subservient to their husbands, and may not serve as deacons or pastors.

Carter suggests that accepting these teachings pushes women into an inferior role to men. He also seems to draw a parallel between such teaching and the horrors of forced prostitution, genital mutilation, rape, and slavery.

The Washington Post/Newsweek blog “On Faith” asked my response. What I told them was that, with all due respect, I find Carter’s statement imprudent and presumptuous. His statement paints every religious tradition with the same brush.

It is true that some have abused Scripture in pursuing oppressive agendas, like arguments for slavery, apartheid, and the denial of rights to women and minorities. But these abuses cannot be supported by an appeal to God’s word, especially when Scripture is interpreted according to the grand tradition of the Church.

Scripture teaches that men and women play complementary roles. For example, the wife is to submit to her husband exactly as the Church submits to Christ. The husband is to give his life for his wife, as Jesus gave His life for the Church-hardly discrimination or oppression. So, please, let’s not confuse Christian teachings with the offensive practices of other faiths-such as radical Islam’s deplorable treatment of women.

In addition, Carter’s denunciation of the plain teachings of Scripture as “male interpretation of religious texts,” transgresses the teachings of the Fathers, the Reformers, and reliable modern interpreters. God’s Word doesn’t have to conform to the declaration of man or the shifting philosophical sands.

Telling people what the Scripture ought to say is pure hubris. I have more confidence in 2,000 years of careful reflection on the ancient texts and the apostolic tradition than I do with the latest fad or somebody’s “aha” moment.

Most astonishing, Carter charges that biblical teaching about male headship is “in clear violation” of the United Nation’s Universal Declaration of Human Rights. Does he really imagine that God’s teachings must comply with the United Nations?

Finally, Carter says he is now a member of “an independent group of global leaders” working to address “major causes of human suffering.” Well, I would like to remind the former President that the Church that has always led the fight to relieve human suffering. Early Christians rescued abandoned babies, tended the dying during the plagues, led the fight against slavery.

When we see the press accepting such charges as distortions of our faith, we had better start doing a better job defending the church against such false claims.

So maybe unwittingly the former President has provided a teaching moment-an opportunity to set the record straight on which faith tradition has always defended human dignity and the rights of the most vulnerable among us.