I’m Naked Under My Clothes 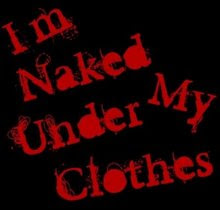 When I’m Naked Under My Clothes first started, the purpose was to shock and offend. But God has changed our hearts and minds, and now we have a very different mission.

We are based off of the simple message of Genesis 2:25: “Now the man and his wife were both naked, but they felt no shame.” These two people had nothing to hide from the world or from God. They were completely innocent.

We believe that physically, you need to wear clothes. Seriously.

Spiritually? Trying to cover up who you truly are before God counts as nothing but foolishness.

You need to let yourself become open and exposed before Him, because until you do you will never know how hopeless you are, and how gracious and merciful He truly is.

I personally enjoyed this post and I wish the best for the blog and people behind it (I am more than willing to admit HUGE JEALOUSY over the 3D effect of the logo I have no idea how to do).

Often it is a young person who will see clearly to lead the older, 'and a litrle child shall lead them.

I hope we can all "skinnydip" in the word and come up as naked and as fresh as babes in the blanket of a loving God's care.

Labels: I’m Naked Under My Clothes

Doctrine of God: Is God all knowing? 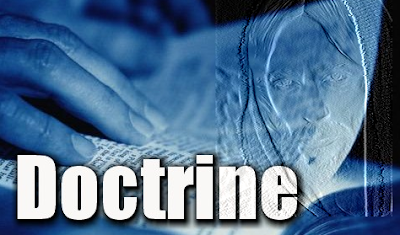 Concurrence - In response to:

Is God all knowing?

This post is my resonse to Tamra’s question: Is God all knowing?

Your question is one that is the age old issue of how the will of God and the will (wills) of the creature interact or work together. There have been books written about this, but I will attempt in a few words to help bring you out of confusion.

This question is, significantly enough, asked in Scripture itself in Romans 9:19, “You will say to me then, ‘Why does he still find fault? For who can resist his will?’” (ESV). The context, as you may recognize, is that of the classic teaching of Scripture on election (9:11) and predestination (8:30). So you may take comfort in the fact that you are not alone in seeking to understand this issue. Also, and more importantly, the fact that you are asking the same question that Scripture asks means that you have understood the two principles that Scripture is revealing take place at the same time in the fabric of reality. Those two principles are the working of (1) the will of God and (2) the will of the creature. I can imagine Paul teaching in a Bible study group about the sovereignty of God or election and predestination as he writes in Romans 9 and someone raising their hand and saying, “Wait a minute Paul, I’m confused…” and asking your question. The point I am making is that it is because you are hearing what the Scripture actually teaches, that both God’s will and the creature’s will work at the same time, that this confusion arises in your mind.

I believe that the root cause of your confusion is what in logic is called bifurcation, which is the fallacy of assuming that there are two and only two alternatives for the solution of a problem. The two alternatives that are being assumed that give rise to the confusion is that it is either God’s will and predestination or man’s will and choice. People wrongly assume that is the way it must work. From this false assumption arise all the wrong implications of this, such as why pray or why evangelize - actually, why do anything for as Romans 9:19 says, “Who can resist His will?”

What the Scriptures teach is the doctrine theologians call “Concurrence” - a technical word that simply means “occurring at the same time.” Scripture teaches that both God’s will and man’s will work at the same time in the fabric of reality. It is like the warp and woof of a fabric and without both working together the fabric cannot exist - all you have is strings. We see this in many places in Scripture. Three of the greatest are Genesis 50:20, Isaiah 10:5-7, and Acts 2:23. What is important about these passages is that they declare that at the same time and in the same acts God is working out His will for His good purposes and people are choosing to do their actions with evil motives for which they are morally responsible. Genesis 50:20 says, “As for you, you meant evil against me, but God meant it for good, to bring it about that many people should be kept alive, as they are today” (ESV). This clearly says that in the same actions God chose and worked and man chose and worked, God’s work was good and man’s evil. Both wills worked in the very same act at the very same time, one was good, one was evil.

Now I believe the real problem people have with this not that both work together in the same act, one for good and one for evil, but how this happens. It is most often the case that, because people don’t understand the how, that they are confused and then do not accept the Scripture’s teaching concerning the that. However, this should not be a problem for a Christian since the essential foundational doctrines of the Christian faith have this very problem. We believe in the Trinity, one God Who eternally exists in three Persons, God the Father, God the Son, and God the Holy Spirit. We believe that this is the truth about God, but no one understands how this is. We believe that Jesus is the God-man, eternally God the Son Who took upon Himself human nature in time-space so that at the same time He had two natures, God and humanity, yet He was one Person. We believe that this is the truth about Christ, but no one understands how this is. The doctrine of the Person of Christ, two natures in one Person, is actually in essence a variation of the doctrine of God’s sovereign will (predestination) and human choice, two wills working in one act. If you as a Christian can believe, accept, and confess the essential truth about the Person of Christ (not understand, but believe, accept, and confess), then you should (and I say should) be able to believe and accept the Scriptures’ teaching about the doctrine of Concurrence.

I believe that it is also most significant that another example of this “problem” exists in physics and the nature of the universe. Physicists now know that two principles operate at the same time in the physical universe: General Relativity and Indeterminacy. General Reality was first taught by Einstein. In summary, it teaches that in the grand scheme of things, at the highest overall level, everything in the physical universe runs like a machine. For example, we can know the exact locations of all the planets and stars at any time. That is why we could send a man to the moon - we knew exactly where it would be. Indeterminacy, which deals with quantum mechanics, says that on the smallest level, no one can know where any quanta (the smallest particles of physical matter) will be. Physicists know that both of these principles are true of the reality of the physical universe and that these two principles seem to contradict each other. They know that these two principles are true but they don’t know how. One interesting thing about this is that Einstein, no slouch in intellectual ability, did not accept Indeterminacy because he didn’t understand how it would work with General Relativity!

Using physics as an example and illustration, General Relativity is like that of God’s sovereign will by which He has ordained and predestined everything that will happen, and Indeterminacy is like that of human choice (and every creature’s choice, for every creature - even a dog or a mosquito has creaturely choice). Both work at the same time. But what happens is that, like Einstein, people don’t understand how these work together and opt out for one or the other. To opt out for Predestination alone is to believe in Fatalism or what is theologically called Hyper-Calvinism. To opt out for man’s choice (free will) will inevitably lead one to remove from God His sovereign attributes, such as being all-knowing. Both options (the fallacy of bifurcation) are the result of seeking to understand with the capacity of one’s own brain power how the infinite, eternal God relates to limited, space-time creatures. It doesn’t matter how great one’s brain capacity is - a million gigabits - it is still limited. The fact is that the Bible teaches that both work at the same time - God works sovereignly and has preordained everything and human’s make actual moral choices that actually affect and influence the fabric of reality. Perhaps the best example of this is that immediately after teaching about predestination and election in Romans 9, Paul says that he prays for every Israelite to be saved (Romans 10:1). He didn’t allow a false implication to arise from a true principle. By the way, Romans is filled with Paul dealing with false implications of true doctrine - for example, “Shall we sin that grace may abound?” (6:1).

In conclusion, consider what Paul wrote in Philippians 2:12-13, “Therefore, my beloved, as you have always obeyed, so now, not only as in my presence but much more in my absence, work out your own salvation with fear and trembling, for it is God who works in you, both to will and to work for his good pleasure” (ESV). Both our will and God’s will work together for His good and sovereign pleasure. The Scriptures teach that this is what happens, but doesn’t reveal how. It is at places like this that we must take the counsel and example of Augustine to heart, “I believe, therefore I know.” May the LORD bless you. I hope this has been helpful.