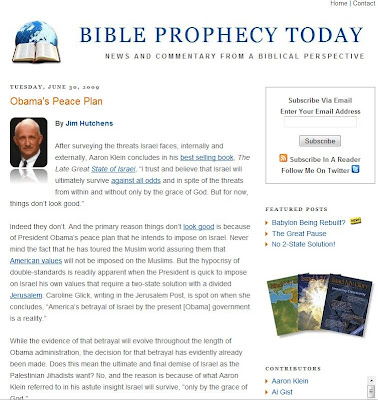 Bible Prophecy Today, BPT on Twitter has suspended indefinitely it's comments potion of its site.

Using the IntenseDebate Widget, they are exploring other options as far as comments to Articles posted as Blogs are concerned.

I highly enjoyed and will visit the site often as it is a valued resource though the interaction is now gone.

It's clean appeal and growing number of participants reminded me of many years of Forums, a forerunner of Blogging.

Interaction on Blogs is difficult at best and controversy surrounds End Times and Latter Day Prophecy Sites at best, but this is one of the few that in an area where the outrageous is often promoted for profit, I saw this site as fair and balanced to the mixture of Pre-Tribulation Scholars available and pundits.

In the near future, I hope to develop a Specific Site for Interaction and Comment on Topics and Events as they relate to Eschatology and the study of Last Days.

Being gone from the Cyber scene for a few days, almost a week, I was glad to be away though I miss those who will not be there to commnet on BPT. Keep them in your prayers and support them with a visit regularly.